Nicole Van Dorn’s quest for answers after the death of her husband is chronicled in the Investigative Reporting Program‘s new documentary “Who Killed Lt. Van Dorn?,” by UC Berkeley Graduate School of Journalism alums Zachary Stauffer (’08) and Jason Paladino (’15). In total, 18 J-School students and graduates worked on the film. The Van Dorn family on Jenny Lake in Corinth, N.Y., in July 2013. via Nicole Van Dorn

Wes returned from deployment in Korea right in time for Christmas — the month before he died. After a carefree week in the mountains, he gripped my hand tightly on our drive home. He chatted with practiced stoicism about the risks of his job: The helicopters are always broken. They barely fly. The situation isn’t getting any better, Nicole, maybe worse. We can’t order new parts, and maintenance isn’t taken seriously. People sign off on tasks that aren’t done. What do you think about me cross-commissioning to the Coast Guard?

We agreed that when Wes went back to work, he would document any malpractice, like falsifying maintenance records, or any questionable circumstances around the helicopters he was flying. He would continue to petition leadership to actually lead — to fight for the funding needed to make repairs and refuse to accept shoddy work done simply to bolster the ratio of operable to inoperable aircraft. Eventually, we knew, his record and reputation would lead him to command, where he could confront the community’s daunting, endemic challenges. In the meantime, Wes would be meticulous during his preflight checks.

That’s what he was doing on the morning of Jan. 8, 2014. Yet two hours into an ordinary training mission, his helicopter failed him. A bundle of zip-tied electrical wires chafed against a fuel transfer line until it made a hole through which fuel started to leak. The fuel then came in contact with exposed wires and started a fire. Without warning, a wall of flames exploded through the cabin, filling it with thick black smoke that blinded Wes and his co-pilot. Almost 37,000 pounds of burning steel slammed tail-first into the ocean, dragging the five men inside down with it. Only two of them ultimately survived. 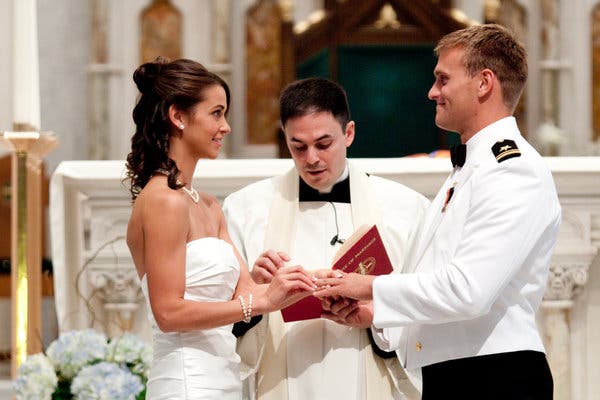 Nicole and J Wesley on their wedding day, April 24, 2010, in Portland, Maine.
via Nicole Van Dorn

Years of the Navy ignoring warning signs led to this tragedy, leaving a legacy of pain for each survivor — spouse, child or fellow aircrewman. Unlike one of the other widows, my husband was rescued right away, so at least I didn’t have to hold on to hope for six days that because a body had not been recovered he could still be alive. Unlike that woman, I didn’t have to watch as my four children were told that their father was eventually found in the wreckage, but the remains were “not suitable for viewing.” At least I didn’t have to live my life wondering who our children would have been and what my husband would have been like as a father, as the third widow does. And unlike the two men who survived the crash, I at least don’t have to live with chronic physical and mental wounds, racked by post-traumatic stress disorder. I got to hold my husband as he died, to kiss him goodbye. At least there’s that.

Wes reached the hospital still conscious, but hypothermia is persistent and cruel. By the time I was finally able to argue my way through hospital bureaucracy to get to him, his wide eyes were the same piercing blue-green hue, yet they were empty, lifeless. There he was — my husband, my best friend — succumbing to an inevitable, fatal reality. With my head on his chest, I pleaded: “Come back to me, J Wesley. Don’t leave, not now.” A nurse gently placed her hands on my shoulders and moved me to the back of the room. The sense of impending, inevitable anguish was crippling. I felt as if I was standing in the background of my own life — an idle observer of somebody else’s nightmare. I watched as my worst fear, magnified and amplified, cascaded past as if on an old movie reel. The reel came to an abrupt end: “Time of death, 4:35 p.m.” I became a widow, and Wes became a “was.” My world stopped. Then the questions started.

I’ve lost track of how many times people asked: “Do you need help? How can I help?” At some point, necessity taught me how to block them out. This question aggravated my already overwhelmed state of being and increased my sense of isolated otherness. While I appreciated the underlying desire to lessen the burden of grief, I thought the answer to the first question was glaringly obvious. Of course I was not O.K.; would you be?

Being asked how to help was equally jarring. In those first few months after Wes died, it rang so small-minded, so fortunately naïve. Expecting me to identify and communicate my needs was so painfully backward. Help or don’t help, I didn’t care. But did no one understand that I had to repeatedly remind myself to breathe? To remember that the brake pedal is on the left? That the boys need to eat, again? Please, please do not ask me to see through this haze of nothingness that shades my entire existence. Please do not require me to spend my precious energy on something so small. It is all being consumed by a monstrous void already.

Never was the void so visceral than when our children were involved. My 4-year-old crawled into my bed early one morning, choking back tears. His words were searing: “Where is Daddy? Was he here last night?” I was not prepared for this question. I wanted so desperately to tell my son: “Yes, miracles do happen. Daddy is alive. He is here.” My heart burned to take away his immediate pain, and mine too. My own grief, anger and confusion were clouding my mind, coaxing me to whitewash the harsh reality. But a flood of primal, maternal instinct took over. My duty was clear: protect my child from further trauma. I could not give him the false hope that we both so desperately craved. “No, sweet boy, Daddy was not here,” I told him firmly. “He would never choose to leave you, but Daddy is gone. He’s never coming home again.” His shattering cry is forever etched into me. 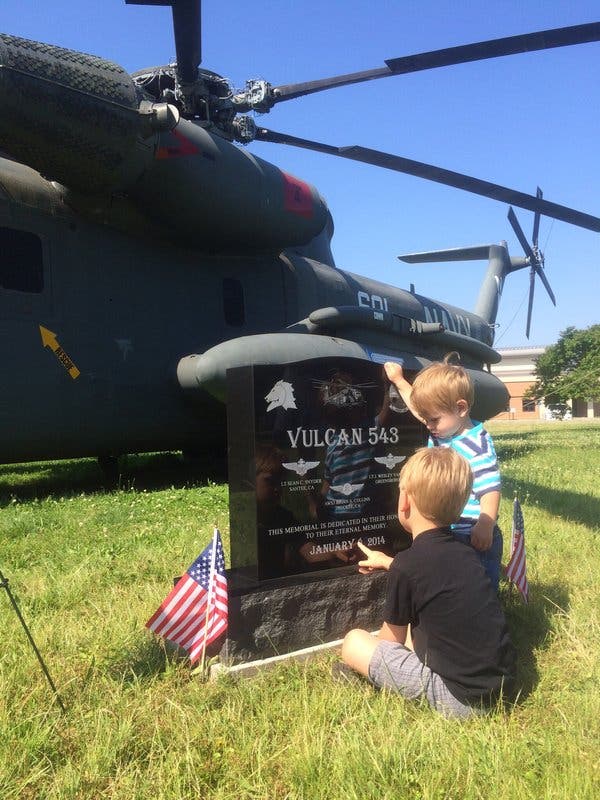 J Wesley and Nicole’s two sons in 2014 at the memorial that J Wesley’s squadron constructed after the accident in Norfolk, Va. via Nicole Van Dorn

Another question that roiled my soul: “Have you written thank you notes to everyone who brought you meals yet?” I was and still am astonished by the audacity of this question. The gift of a meal is a gift that seeks to lessen a burden, not to swap one burden with another.

As the months passed, the concept of a reality without Wes seemed to normalize for those around me. There was an unspoken expectation in the air that life goes on, and therefore so must I. Eventually, this expectation was voiced: “What are you going to do next? Are you going to move? You should make a plan.” This question brought a tidal wave of conflicting emotions. As a freshly minted widow, I did not have the physiological agency to consider line items this large. Being asked this question made me feel so alone. Home in my empty house, I was left to wrestle with this question that I hate. My mind raced. How could I even begin to imagine a future without him by my side? The heightened sense of isolation brought me to my knees. I had so much to say, but no partner in whom I could confide. I felt out of place in my own life. My identity felt like a dichotomy: Former me was found in and with Wes, new me was a stranger.

It was tragically fitting that the innocent, demanding question of a 2-year-old would bridge this chasm for me. On Mother’s Day in 2013, I slept in until 10:30 a.m. I woke up to a pizza omelet, bacon and coffee on my nightstand. I went downstairs to find a clean kitchen, a dozen roses and a quiet house. On Mother’s Day in 2014, I woke up at 3 a.m. to the sobbing of a distraught child, and at 7 a.m. to a screaming, inconsolable toddler. I was able to half-brush my teeth before my youngest spilled his bottle across the whole house, then slipped on the wet floor, fell, banged his head and wailed some more. I cooked breakfast while the boys destroyed nearly every room. My older son complained that his eggs were too hot and that the cheese tasted “stinky.” His younger brother refused the eggs altogether, asking for the only thing we were out of: bananas.

As the three of us sat together, facing the empty chair at the head of the table, surrounded by pictures of helicopters and three folded flags, I began to wonder. Now that Wes was not sitting physically here with us, would the boys ever truly know how wonderful their father made our last Mother’s Day together (and, really, every day)? In that moment, I was silenced by my own thought — of course they would. I would tell them, and better yet, show them.

The room looked less hazy and gray, the light through the windows seemed less menacing. For the first time, I was able to see some purpose through the pain. Grief is powerfully transformative, I realized. It is not a sentence, it is a promise. My next step became clear: It was time to learn to live around the huge gaping hole of Wes’s absence — not past it, not without it, just around it. All at once, I no longer felt like a dichotomy. The truth was so confusing yet so simple, I understood. I am two different versions of myself, walking together into the future.

Nicole Van Dorn is a remarried mother of four and a Gold Star widow. She is an honors graduate of McGill University and lives in Virginia Beach. Her quest for answers after the death of her husband is chronicled in the film “Who Killed Lt. Van Dorn?,” which will screen May 12 at Cinema Village in New York City.